Napoleon’s expedition in Russia in 1812 is still a great field of research for historians and one of the most interesting subject for deliberations and discussions. Many books and articles were written in this matter. However, the topic is still up to date. Recently, a new intriguing book appeared in this subject. It is called Napoleon’s Army in Russia. The illustrated memories of Albrecht Adam -1812 and was translated and compiled by a British historian specialising in Napoleonic history - Jonathan North. 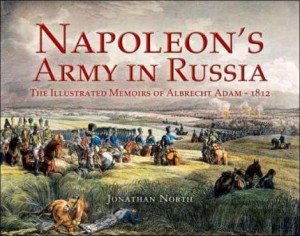 The book is an English translation of Albrecht Adam’s memoirs. This German artist and participant of expedition in Russia relates the history of the war from his own perspective. His memories are detailed - divided into days and sometimes even hours. Moreover, each single part is illustrated by colour plate showing soldiers, phase of battle or the battlefield. All of them were painted and sketched by him during his march with the Napoleon’s magnificent army. The book in general contains 72 excellent high-quality full-colour plates from the campaign. All of them are in A4 size so we can admire wonderful details of these illustrations.

As the direct witness of events unfolding in 1812 Adam splendidly relates the situation of The Great Army, especially the morale and the supply situation. He was attached to IV Corps, which was largely composed of Italians. However, Adam describes also other detachments and forces, especially Bavarian ones.

Jonathan North, the author and translator of the publication, attached his preface and introduction, where he described briefly the history and the genesis of the war in 1812. A short biography of Albrecht Adam can be also found in that part.

The main advantage of the book is Adam’s colorful and vivid language. The example we can easily find on page 92, describing situation from 27th July 1812:

„Vitepsk was romantically situated, surounded as it is by rolling hills covered with lush vegetation and picturesque woods. Such a sight made an agreeable impression even on those who were familiar with the beauties of Italy”.

As the slight disadvantage we can regard lack of annotations. Instead of them at the end of the book author placed short bibliography. Moreover, North’s comments and introduction are, in our opinion, too curt and too brief. Nevertheless the subject, brilliant language and fantastic original illustrations fully compensate these drawbacks.

Visually, the book is just excellent. Hard cover, beautiful wrapper and high-quality paper cause that it is the real pleasure to take it into the hand.

In all points of view the Napoleon’s Army in Russia. The illustrated memories of Albrecht Adam - 1812 is worth reading. I could recommend it to every person interested in Napoleonic campaigns. This book provides the opportunity not only to admire uniforms and armament of soldiers illustrated by eyewitness but also to look deeper in The Great Army’s realities. We have unique opportunity to look at Napoleon’s army in point of one soldier’s view. Thanks to it, we can gain wider information of invasion in Russia in 1812.